Memphis has soul, it possess a grit that can be felt throughout the city. It’s this authentic character even amongst the most tired tourist spots. I’m not a huge Elvis fan, but you don’t visit Memphis without going to Graceland. A different tour guide experience, your handed an ipad and headphones to help direct the tour. Older gentlemen and their wives at times looked like lost children with the clunky tech around their neck, trying to figure out where to go next once the audio (spoken by John Stamos) ended. It’s a tour that depends on self- reliance to move from one room to the next, and a little bit of attitude in not allowing the museum staff to heard you from one room to the next too quickly.

Elvis’s decorating style was as distinctive as his sound. There is no doubt you are in the home of a king; it’s opulent carved furniture, stained glass windows, shag carpeting as wall treatment, and bright patterns on the walls are loud but in harmony. For any interior design nerd, you must go to Graceland. It overflows with unique focus pieces, and is a challenge to the bold to see if one could decorate their own home this way, and succeed.

Next we headed to Sun Records, the source of where it all began. Parking in the back alley a man approached us, being friendly he chatted us up about traveling and being from California. He eventually asked for a couple bucks, and I said I had no change but would give him something when I broke my twenty.  Going into Sun, I bought our tour tickets and then walked back outside to search for the gentleman.  He appeared out of nowhere, once again like how he appeared the first time, and lit up at the fact we had gone out to actually find him to give him the dollar. A woman of my word, I handed it to him and he gave us a hug.

The tour of Sun was interesting, Bowerbird geeked out on all the gear. I loved the story about the first distorted guitar sound. It was a happy accident when the band (can’t remember which band) shoved newspaper into the cone of a broken amp, and it created a new and unique sound.  It was neat being in the building where so many legends got their start, but it lacked magic most likely due to the fact I was experiencing it with 30 strangers.

Breaking up Memphis into two post seems like the friendliest thing to do for readers with a short attention span. As after our two major Memphis tourist spot we started to dive into the local scene, being the fly on the wall to a colored conversation and seeing an amazing musician; all while following the recommended trail of my favorite bands hang outs and history. 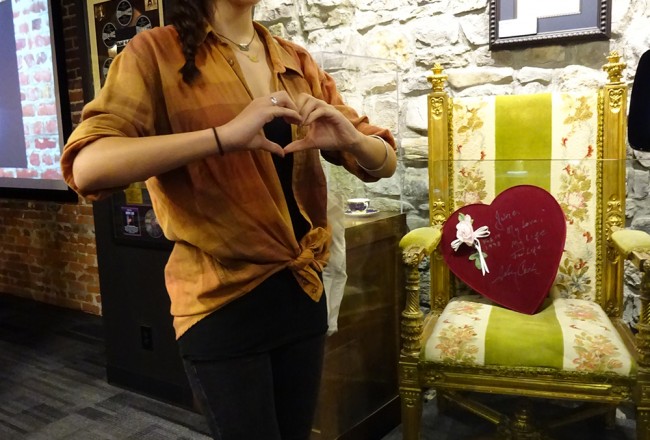