The Circle of Gift Giving : Gifts that Give Back 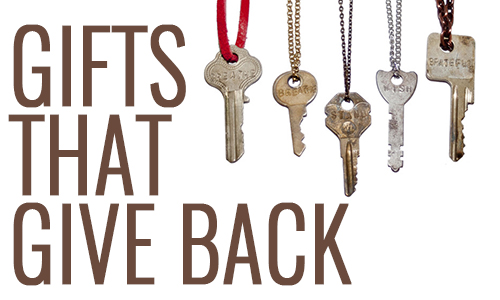 This holiday season I’m being more aware of where my money is going. My intent is buy only from local (made in America) vendors and socially conscious companies. This post is about the gifts that give back!  Those gifts that a portion of the purchase will be going towards a charity, organization, or a person in a developing country to better their life. I haven’t decided on the different sites, charities, and fair trade projects that I will be going through for my gift shopping. I’m looking at other full time bloggers more comprehensive list for suggestions. But I wanted to share two sites that you might not know about, and after the jump are two sites you probably have.

My sister purchased gifts a few years ago from The Women’s Bean Project, an organization that helps break the cycle of poverty and chronic unemployment for women. She put a chili making kit in a white elephant gift exchange which landed with my mom, who made the chili and it was yummers. Definitely a great gift idea for the people in your life that don’t have room for more possessions. Also it’s a Colorado based organization, and I like that its helping its community in the States.

For the less kitchen friendly friends, maybe some jewelry from The Giving Keys a company that employs the homeless and provides hope. My former coworker and I got in a heated argument about these keys last year I will not rehash, but I think its a cool company.

You might have already heard but Lauren Conrad opened up The Little Market right before the holidays, and I’ve been poking around the shop. We all know and our very proud of the Laguna Beach High Schooler who grew up into a media mastermind in Los Angeles. But she took her brains and beauty to the next level with opening up The Little Market,  a fair trade company. The Little Market purchases designs from local artisans in developing countries to help the local economy, help people rise out of poverty, and empower the community. This girl has a heart of gold tied with a pretty pink bow, or at least I think she does. Also I can’t help but love that the company was co-founded by a Hello Giggles contributor. It’s basically the best seal of approval I need.

I like that a big, well known company, also known for their charitable core values created a marketplace for just this purpose; just visit Toms Marketplace. Yup Tom’s the shoe company. They have a decent array of gifts, that look as if they mostly target global issues, but they are also a bit costly. Its well organized, and you can shop  based on a social cause like education, water, or children. I’m still in debate if I’ll actually use their marketplace but its cool they created it!