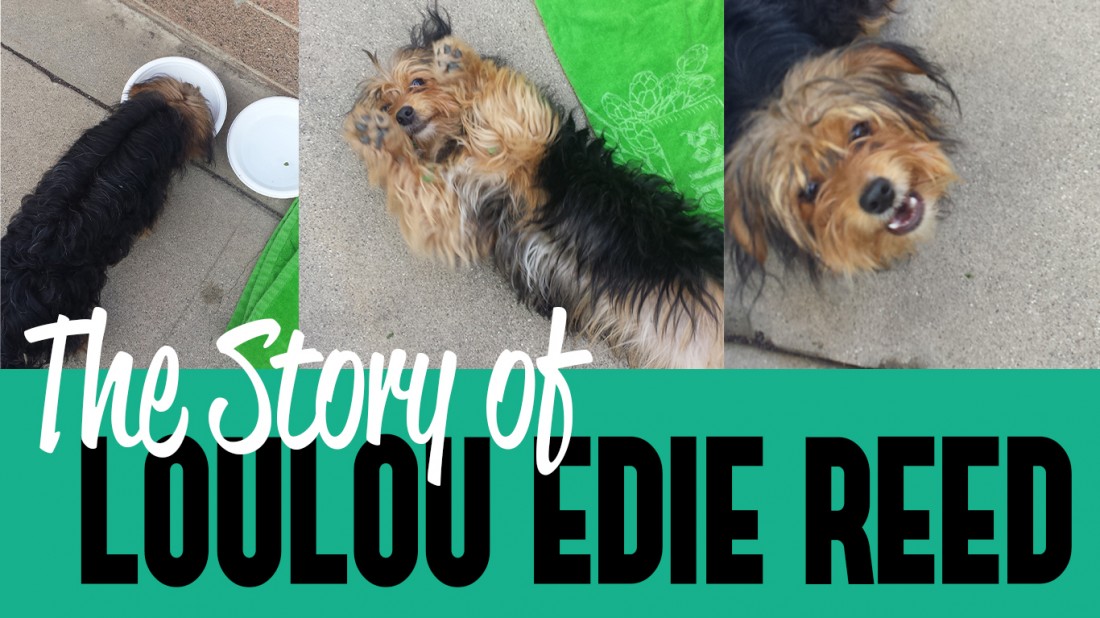 The story of Loulou Edie Reed is filled with suspense, drama, and lots of love. A Yorkshire terrier with a full name and mysterious background, she waltzed into my (our) life when the last thing on my mind was adopting a new dog. But like most of the pets my family has acquired, we don’t pick the time for a dog- the dog picks us.

FINDING LOU:
On February 5th, 2015 I was working in my home office that faces out into the front yard. It’s not rare to see a stray cat wandering outside and using the brick wall that separates my house from the neighbors as a highway; so when I saw a small black body pass my window I assumed it was a black cat. It wasn’t until the animal waked away that I noticed it was a dog. Usually, I am the first one to jump into action when it comes to a stray dog; but on this day I had a meeting in North Hollywood with a potential client. In forty-five minutes I was supposed to jump on the freeway and charm a cosmetic company into hiring me as their social media manager. So, I decided to leave my interview clothing intact and to continue to prep for this client, leaving the dog to another Good Samaritan as the neighborhood is filled with retirees and stay at home moms.

Well, the universe and Lou had a different idea, because she came back to my yard after a five minute hiatus. Taking the hint, I threw on jeans and a ratty t-shirt and went to my front yard to find the dog. I called out for the puppy and found her hiding behind my car. She jumped into the flowerbed and army crawled all the way to me, making it very easy to pick her up and secure her in our dog runner. She was the friendliest dog I had caught since my baby Blondie who had come into my life 15 years prior and passed away 4 years ago. There was so much about this little dog that reminded me of Blondie, I swear she was our other dog incarnate, but I refused to get attached. We (my fiancé and I) were not looking for a dog.

I changed back into my interview clothes and drove to the client, who I also secured for 2015. When I returned home I figured out next steps; wash the dog, get a collar in order to control her when dropping her off at the pound tomorrow, put out a request for dog rescues on Facebook*, and contact my aunt to see if she would be open to adopting this new found dog. Since I have an older dog, Mystie, and we didn’t know what this stray might have, Lou slept outside with lots of blankets, food and water. She cried a little bit, but her temperament was always pleasant and sweet. ADOPTION:
The next day I took her to our local shelter, the place I knew any family who would be missing her would search, and found out she wasn’t chipped. The receptionist was a capital B. When we found out Lou wasn’t chipped I was ready to bring her home and set up a rescue situation, but the shelter said it was policy that she remain at the shelter for 5 days in order for the rightful owners to locate her. I felt so incredibly guilty and sad for letting this darling dog into the hands of the shelter and beat myself up for days. Since I work from home I visited her every day I could, twice a day, petting her through the cold bars. The pound was heartbreaking and I even tried to push the other jailed pups onto friends that were interested in Lou. My name was first on the adopt list from day one, but by day three of my morning and night devotion, Bowerbird and I decided to adopt Lou.

On the second to last day before I could break her out, I received a call from the pound informing me someone was claiming Lou was their dog, my heart dropped. I was excited if it really was their dog, but I found it odd it took so long for someone to come forward. I know if I lost Lou, I’d be all over every website and shelter; I’d likely get a vinyl banner made to hang across Main Street. Fortunately by the end of the day the shelter called and informed me the dog did not belong to those claiming her. They didn’t give me any specifics, but they do request evidence from those claiming a shelter dog to prove ownership. I was ecstatic and now my anxiety shot up fearing I’d have to face a confrontation with the false owner.

I couldn’t sleep that night, I was terrified I’d oversleep, miss my alarm and the other people would come and swoop up Lou. I was at the shelter right when it opened to sign the adoption papers and with a swipe of my credit card, Lou was mine (ours). We took her out of the jail cell and into the gated play area outside. I was so happy she was finally able to be in the sun. THE DRAMA:
As we were playing with Lou in the shelter yard, a man was lingering by his car and watching us the entire time. Eventually, he asked the shelter worker if he could see the dog. I knew it was the “other family” my heart started racing and I pretended to be ignorant of the situation. The shelter worker said no, as I had just adopted the dog. The man then went into a long story about how his puppy had been stolen a year ago. When the shelter worker asked if the dog was chipped or had received shots, the man said no because the dog was too young. It was a tense twenty minutes, but the shelter worker was a strong advocate for me and eventually the man drove off. After playing with Lou for a solid hour, she had to go back to the shelter for one more night in order to get all her shots. The next day when it was finally time for her to come home with us, the receptionist left her file open on the desk and I could see notes on the person claiming it was their dog. I quickly snapped a photo of her file like Nancy Drew when the receptionist went to retrieve Lou. The notes said that Lou was too young to be the dog they were claiming had been stolen. They also didn’t have any medical records or photos of their dog. Since, the total cost to adopt Lou was around $160, it’s no wonder these people were trying to nab Lou for free. Apparently, Yorkshire terriers are premium dogs in the shelter world.

I believe that Lou ended up with the right people, those people being Bowerbird and I, because she had a lot of medical expenses post adoption that the sneaky people may not have invested in. She had caught kennel cough, had worms, and still needed to be spade. We were making weekly visits to the vet for about a month and I officially capped off the cost of this new pup around $400. NAME & MYSTERY:
Lou was just a hardcore street dog that managed to survive as a stray. We still see her habits of from days on the street. She likes to sleep under things and in tight spaces, her favorite place to hang out is under the bed. When we would take her for walks, she’d always want to rest under cars. She also knew how to drink out of a water bottle. We suspect that she had been the dog of a homeless person. It makes me sad thinking that they might have lost her, but maybe she lost them. She is incredibly friendly and sweet. I’ve never seen her snap or growl at a person and I’ve only seen her show teeth to another dog once, because she had just been bullied by a large-breed puppy.

I named Lou after Lou Reed the first day I found her. I had just given her a bath and was thinking of names. At first I thought Nico, since I was going through a Velvet Underground phase but remembered my friend Nima’s dog was named Nico. Then I thought of Lou Reed, I called out to her with the name Lou and it seemed to fit. I had also been reading Edie at the time, about Warhol Superstar Edie Sedgwick. I thought Loulou Edie Reed has a delightful ring to it and that’s why my dog has a full name.

WOAH this is over 1,500 words! If you read to the end I commend you. As a bonus I’ve included a playlist to a few of my favorite Lou Reed and Velvet Underground songs. Enjoy!

Do you think the “other family” was actually Loulou’s owners or trying to pull a fast one?