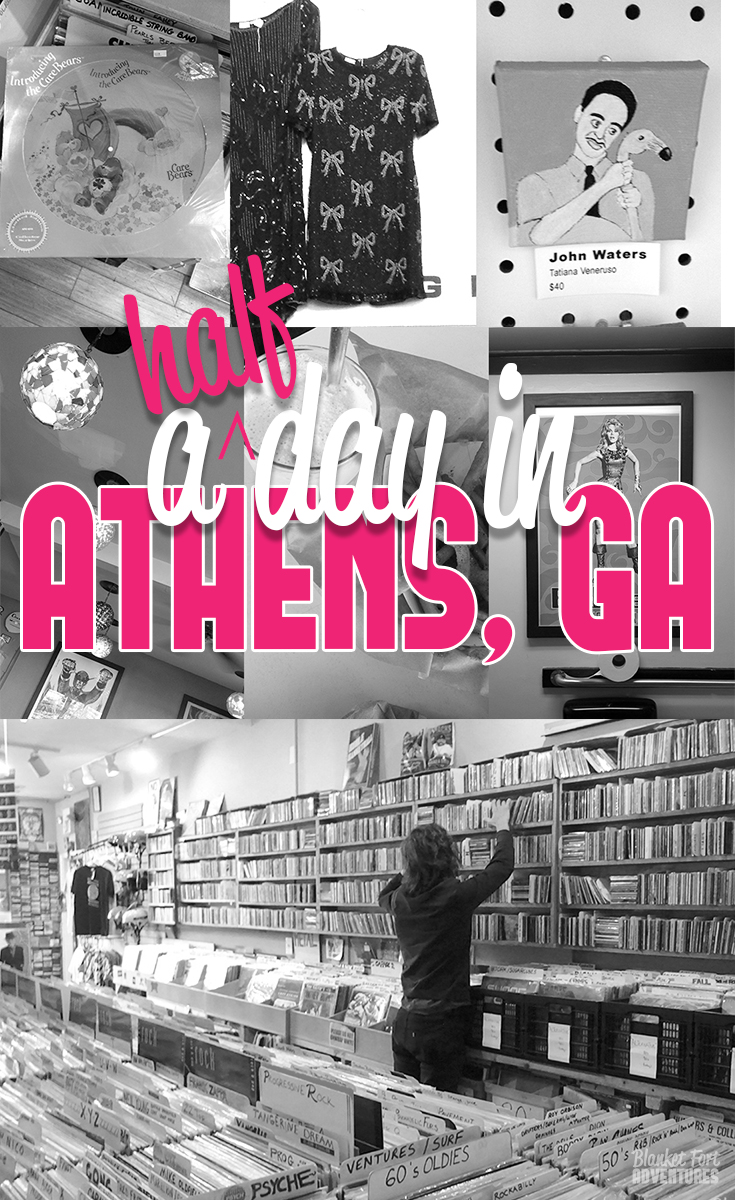 Our road trip had already been steeped in music history, having gone to the Grand Ol Opry in Nashville and Muscle Shoals in Alabama, so it’s to be expected we hit up Athens, GA as well (or at least that’s what Bowerbird felt). The day we visited Athens, we grabbed an awesome breakfast in Atlanta at the Rosebud café. When we picked the restaurant it was unbeknownst to us that the owner, Ron Eyester, was a contestant on Top Chef Season 12.  After our yummy breakfast I dropped off a few of my postcards, that invited people to tweet me while we were on the road, by the door and Ron was one of the awesome people that said hello! From Rosebud we drove over to the Martin Luther King Memorial Center also in Atlanta, it was extremely important to me that we explore the history of the civil rights movement while on our trip. We were going to go to Montgomery, AL before we went to New Orleans but my Atlanta friends told me it was better to experience the Martin Luther King historical sites instead. I’m glad they had suggested the memorial center; I was filled with sadness, joy and humility as I walked through the center seeing relics of segregation and reading Dr. Kings story. Next to the memorial center is Ebenezer Church, the spiritual home to Martin Luther King where he was baptized and was a minister till his passing. Inside the church, they play his speeches and sermons, Bowerbird and I sat for a while in a pew listening to his powerful words until it was time for us to head to Athens. Now, I was completely oblivious to the Athens roots many of my favorite musical acts had come from, like the B-52’s, REM, Of Montreal, and Drive by Truckers. But Bowerbird knew about that Athens’ sound and wanted to see the city that gave birth to it. I made my own Athens artists playlist that’s below and there is definitely a common note. Seeing Drive by Truckers or Lucero while in the South was another goal of the trip, but their tour schedule never synched with our road scheduled. To add insult to injury, when we drove into Downtown Athens and found a parking spot, it happened to be right across a music venue advertising Drive by Truckers would be playing October 31. Athens is about an hour and a half away from Atlanta. We arrived just around the same time our breakfast was wearing off, 1:00 pm. We didn’t know where we were going, only that we wanted to explore, so we just started walking in a general direction down one of the streets. In our aimless wandering I spotted a sign saying “This Is It”, since at the moment I needed a restroom in my life, I took the sign as a sign that this was the place to go. Eventually, we came across an interesting area on Washington, where Low Yo Yo Record store and Clocked diner are located. First we grabbed a quick snack at Clocked, a colorful retro dinner that looks like it could be the post-party destination for a Love Shack rager. Then it was on to crate digging at Low Yo Yo, Bowerbird found a lot of records he wanted to purchase but because we were on a road trip we were afraid of buying vinyl and then leaving it in the car. The potential damage of goods just left in the car to be warmed up by the sun prevented us from many wine and vinyl purchases. Bowerbird and the shop owner geeked out over a few obscure bands. I picked up a silly bookmarker at the worlds tiniest art gallery located in a closet at the back of the store. We bought a few CDs as we didn’t bring any of our own music on the road; a bad idea for one’s data plan. And after about an hour and a half worth of record window shopping, we continued on to wander the streets of downtown Athens. We hopped into a few other vintage and record stores before settling into a pub/coffee shop that was located across from the college. There were a lot of students in there and since I had my backpack on me, I felt like blending in with the locals and busting out my laptop. While on the road I had every intention of blogging on a regular basis, little did I know that isn’t exactly easy when one’s sleeping arrangements doesn’t have wifi or my only downtime is right before bed at midnight (brain dead). So with our bit of downtime, I ordered a hard cider and wrote a blog post, TN:  Johnny Cash & Nashville. We headed back to Atlanta around 6:00pm and had every intention of grabbing dinner in the city, until an accident caused the highway to shut down and our hour and half drive turned into three and half hours. I felt terrible as our ETA kept changing and we had friends waiting for us in Atlanta. We got to our friends place around 10:00pm where they fed us Trader Joes quinoa stir-fry, we watched The Walking Dead, and went to bed.

If you’re visiting Atlanta, I highly suggest taking a day trip to Athens. It has a small town feel but a lot of unique shops and character. If it wasn’t a Sunday, Bowerbird and I might have tried to find a college rager to crash.