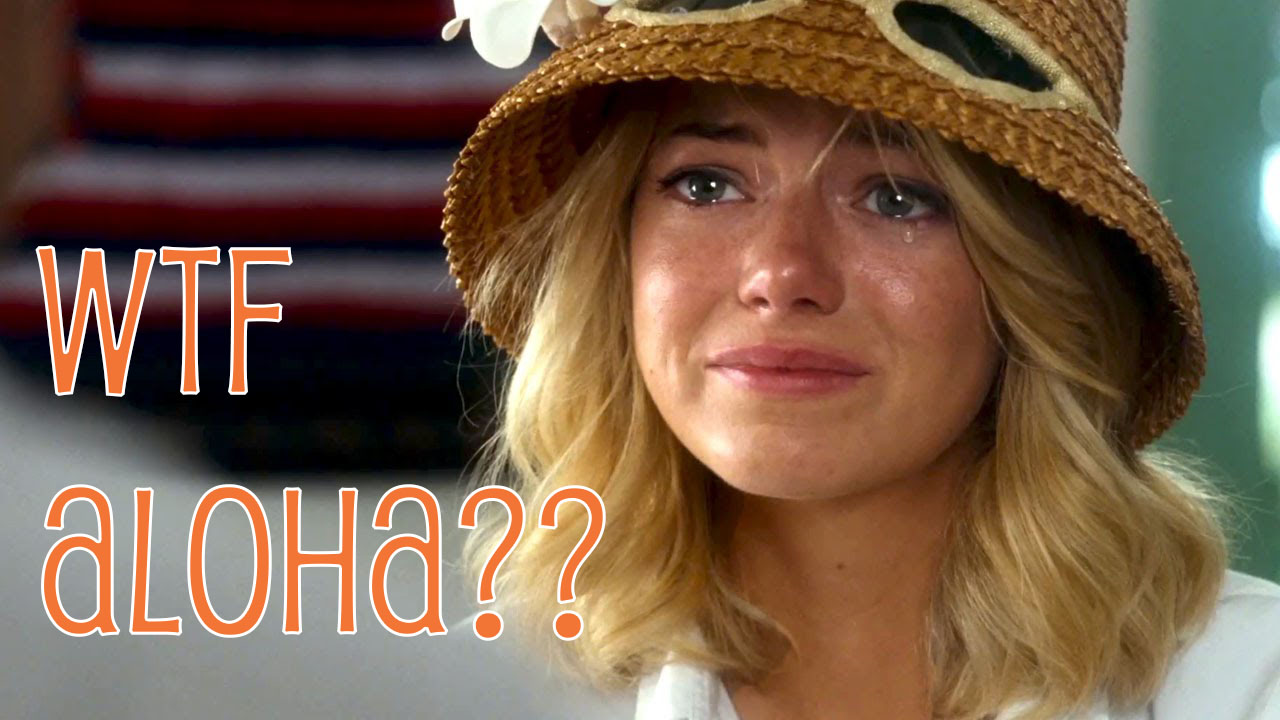 *UPDATE* Cameron Crowe has written a blog post regarding the character of Alisson Ng. He apologizes for having offended people and explains how the character is proud of her heritage although she doesn’t look mixed. I understand how the casting of Emma Stone fits the characters appearance and after talking with my sister who has a blond hair, blue eyed, 1/4 Japanese baby girl – I understand her frustration of people calling out Emma Stone for ‘not looking Asian’. But in the end I stand by my desire that the role have been cast accordingly and that they have gone with an unknown who is a quarter Asian to play the role. I also stand by my desire that pet unicorns become legal.

I’m having major issues with Emma Stone being cast as a half Asian Pacific Islander in the new Cameron Crowe film Aloha and here are my reasons why. Back in the day I wanted to be an actress. I went to professional acting classes for 5 years and even graduated High School early to pursue my career. I did eventually decided the industry wasn’t for me, not because it’s hard or there is rejection that is in every career field. Just being 18 and seeing struggling actors at 28, I didn’t want that to be me in 10 years and knew I didn’t love the craft enough to be that person. So I jumped shipped and went into art. Anyways, when I was in acting classes and going on auditions, being half Asian and half white I was told my roles would be limited. I was also told I’d never be a leading lady. There are other talented mixed actresses out there that probably hear the same thing, and so when a role that is written to be someone of mixed Asian decent is given to someone who isn’t of mixed Asian descent, it’s pretty damn infuriating.

I wouldn’t be surprised if Emma Stone didn’t even have to audition for this film, and instead the studio had three white female actresses in mind. The two other actresses as back up if Ms. Stone didn’t want the part. Also I’d like to remind readers that Hawaiian is an actual ethnic background rooted in ancient Polynesian migration to Hawaii – so this character really should look a quarter Asian and a quarter Pacific Islander. As a mixed Asian woman, I’m not even asking the studio to hire an actress of that exact background, but maybe someone who actually has some Asian/Islander DNA. If a character was written to be half white and half African-American, I really doubt the studio would have hired an all white actress then – think about it.

I compiled a list of actresses that should have possibly been considered before our beloved Emma Stone, but probably weren’t. They are all around her age (Emma Stone was born in 1988) and have a decent amount of Asian in them – some might surprise you.  And I understand Emma Stone is great for the box office, but even if the following actresses acting chops aren’t up to that of Emma Stone, I’m sure they could have found a charming unknown that could deliver an great performance. Emma Stone is insult to injury in an already under represented demographic in entertainment.

What? Our High School Musical songstress is half -Asian? Yes, friends she is! Vanessa is half- Filipino which is considered Asian but has been debated to be more Pacific-Islander. It’s like Vanessa’s mixed background was made for the quarter this and quarter that character. I mean all Asian people look the same, right? Also Vanessa has gone one to perform in a few indie flicks and has worked to break her Disney image. I’d like to see a screen test!

Pretty Little Liar actress, Shay Mitchell, has yet to make her big screen film debut, but this could have been her chance. Her moment! She’s been kicking around on the tv circuit since 2009, but this also half Filipino actress could play Aloha’s Allison Ng. I don’t think Shay is a bad actress, but as rumor had it the studio didn’t have much faith in the film anyways, so why not let her have a screen test.

Nicole is also an ABC Family darling. Playing Kelly Parker on one of my favorite guilty pleasures, Make it or Break it.  Two years younger than Emma Stone, with 10 years of television experience on her resume, maybe she wasn’t right for the part. But her Filipino heritage makes her closer to the character of Alison Ng, than Emma’s Swedish, German, Scottish and Irish roots.

Katie is one of the less Asian actresses on this list and yet my favorite for Aloha. Ms. Findlay is part Chinese mixed with Portuguese, English and Scottish. Unlike Shay and Vanessa who are half Filipino, I think Katie could have acted just as well as Emma Stone in this part. Allison Ng is a fighter pilot with the manic pixie dream girl charm. After seeing Katie in How To Get Away With Murder, take away the goth wardrobe and she could have played this twenty-something dream girl just trying to do her job, find her roots, and maybe fall in love. (I havn’t seen the movie, I’m basing this off of other reviews of Aloha)

Kelsey Chow,  a total unknown still hustling to build up her IMDB credits, but played the ‘Hot Girl’ in the Amazing Spider Man staring Emma Stone. It’s like a sad six degrees of Kevin Bacon, Kelsey is Chinese but probably wasn’t even on the casting list for this mixed Allison Ng part.

I’m getting off my soapbox now, but really there is no reason the studio couldn’t have cast an adorable mixed Asian girl to play the part of Allison Ng. Critics are calling out the absurdity in the casting choice, but the damage is already done – the check has already been cashed by Emma Stone and not a mixed Asian actress. Once again I do want to say I love Emma Stone and she is probably great in this movie. I’d probably really like this movie because all the critics bashing this movie are saying the movie is on par with Elizabethtown, and well Elizabethtown is one of my favorite films. But really, when will studios stop thinking like its 1962 and get with the times!