My Period and the Plight of Humanity 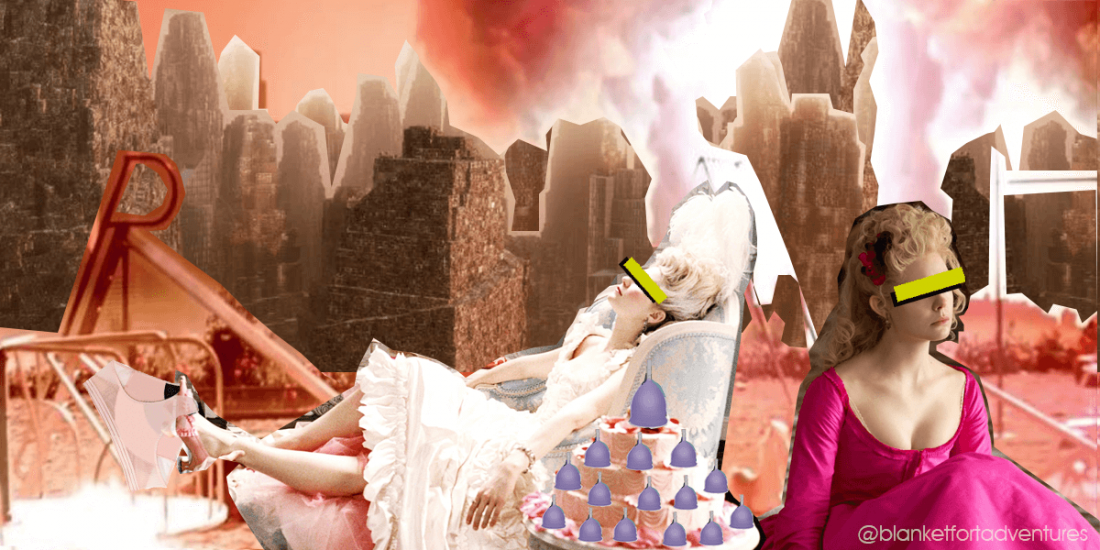 Dunes of fast fashion pile up in the Chilean desert, and sea turtles get straws stuck up their nose. A plastic bag and plastic gloves are kept in our hiking backpack to pick up litter along the dirt paths leading to scenic nature vistas. Only to later throw said litter bag in a bin that ends up in a landfill where it will be isolated from the rest of the environment, yet potentially reach capacity in less than eight years and be closed—forcing a new shiny landfill to be developed somewhere else. I don’t state this to trigger any eco-anxiety. It’s a reality of our human existence due to the overproduction, overconsumption, and over-accumulation driven by the unchecked dark side of capitalist philosophy, free-market rhetoric, and mental health trauma. Yes, corporations are the largest producer of waste. The world would require a seismic shift in priorities to curtail the plain fact that we will eventually exhaust our options, and our planet will have a landscape that doesn’t look too far off from the backdrop of Disney’s Wall-E. I won’t be alive when that happens. I don’t know if my genetic code will be existing in a human lifeform by the time we reach that point. But it doesn’t mean I don’t think of it, nor think of what I can do to curb my own careless behaviors and be a dash more mindful about the planet I inhabit. The reality of being a parasitic species is we will eventually kill the host. And I don’t find hopelessness in this bleak future; I find my own areas of influence to create the illusion of control in the wild chaos that is life.

Like, learning how to shove a menstrual cup up my vagina and investing in $300 worth of eco-alternative menstrual supplies. Clearly, I’m privileged as I have the means to make the pricey upfront purchases without impacting other areas of my life, and I have a private, clean environment to hygienically keep up the cyclical routine. The marketing tactic of sustainability and wellness appeal to our values of keeping not only ourselves but the planet clean and healthy, with a price tag that falls into aspiration and elitism. Stimulating the built-in superiority complex that is engrained in Western cultures evolution from feudalism, feeding on the desire to be comfortable within a court.

However, this isn’t to say that an eco-friendly healthy lifestyle isn’t achievable by other lower-cost means – one would just need to have the one resource that alchemizes money — time. Not ignoring the fact that in most societal structures, you still need money to practice in the exchange of value for goods, but with time – money can be stretched further. I don’t have time. Most of us don’t have time. And I have plugged into the money game. Majority of us HAVE to plug into the money game. And I’m fortunate enough to be in a level of the game with the starter pack I was born with and bonus point tools earned along the way that allows me to shift from Ziplocs to reusable Stasher bags. One $12 bag at a time (24 Ziploc bags is $7.00).

What’s my point? Initially, it was if you have the privilege to learn how to use a menstrual cup and wear period panties then do it for the planet. Because there are likely more people who don’t have that privilege than do, and reusable menstruation cups have the lightest environmental impact. If I can do it, then you definitely can too*. But then it’s unraveled into the philosophical analysis of the fact that we’re all just caught in the hamster wheel of time vs. money because at some point, the paradigm shifted from being caught in a cage of divine right vs. serfdom. And if a paradigm can shift once before, it can shift again and again until at some point we can find the right combination to support the common good and fight back the dark underbelly – just hopefully it occurs before we’re living in a dystopian hellscape surrounded by the things that once adorned our identities, or are taken out by artificial intelligence through nuclear warfare.

HERE ARE THE PRODUCTS THAT I USE FOR MY MENSTRUAL PERIOD

Flex Cup $34.99 – my starter cup, cause I was afraid it would get stuck and it has a pully lever that breaks the seal. It worked well, but I don’t use it anymore — if I don’t have to.

Saalt Soft Cup $29 – I don’t know the brand of the actual cup I use cause it was in the gift bag of an event I went to in 2017 (Didn’t start using it until 2021), but it looks a lot like Saalt cups. Also, I recommend this soft cup for starters. I did use the flex cup once (6 months into using it regularly) and it triggered some of the worst cramps of my life I had to literally sing through the pain. I have a recording.

Saalt High Waist Brief $39 & Saalt Leak Proof Mesh Hipster $39 – I have three pairs of each, and it’s been a slow build of the collection. The underwear is comfortable and makes me feel confident to go out into the world with no visible leaks when wearing a cup. It’s also great for the days leading up to your period when you’re not sure when it will start, but the app says it will be today. It holds until I’m able to get insert a cup. *Please note my thumb has poked a hole in one of the mesh hipsters — unfortunate.

Tree Hugger Cloth Pads $57.00 – Some days I just like to flow and not use a cup, so I invested in cloth pads. The pads are not my favorite, they are bulky and awkward. But they work and serve a greater purpose. I’m glad I have them, but I don’t necessarily love them.

I still use regular pads occasionally, as I might find myself in a situation where my menstrual cup or my period underwear isn’t available. I’m no saint, and I’m not saying you need to be either. But I went 9 months without any traditional methods, and I’ll hang my hat on that.

*you can too if there are no other medical factors stopping you. recommend starting with a smaller cup, you don’t need to be worried about it getting stuck. however, the first cup I used had a pull that broke the seal and helped ease my anxiety. I don’t use it anymore cause it’s pretty big. also, when you fold the cup, place the base of taco shaped cup along the backside of your vaginal opening and use that to guide the cup in. also, deep breathe in and long breathe out – relax the muscle. you can do this!

definitely appeals to the chic factor of a minimalist sustainable lifestyle