Interview with Lauren Rose : The Mind Behind Vagina Slims 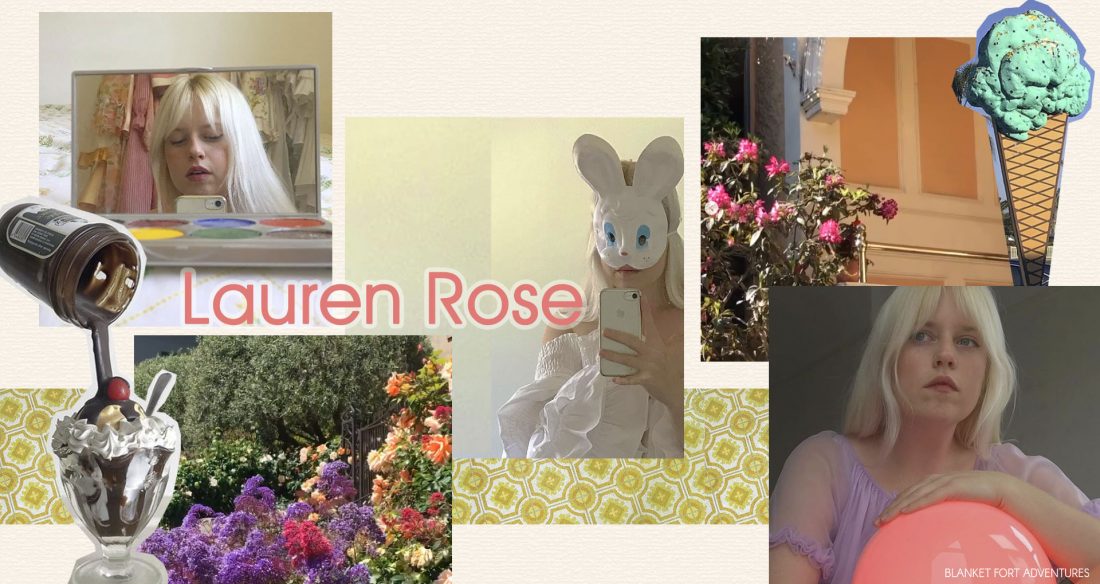 I wrote the following before I ever reached out to Lauren Rose; I was listening to one of her Vagina Slims episodes while crafting the questions I would later email her:

For lack of a better word, I will be referring to Vagina Slims as a podcast. But it exists in a world apart from the idea that comes to mind when you think of a podcast. Vagina Slims gives me old school radio DJ vibes. That one hour hosted by your favorite radio DJ, sharing their thoughts while playing some favorite tunes.

I still stand by this sentiment, but as you get deeper into the interview, you might find it amusing how I was instinctually was picking up on the intent behind Lauren’s refreshing form of expression.

When I was crafting the interview, I was trying to figure out a category to put Lauren and Vagina Slims into, find a way to T-up, or justify my outreach to her. However, the truth is simply that she doesn’t fit into some “creative box”. I just enjoy seeing the world through her eyes, and she mostly shares that viewpoint via her Instagram or Vagina Slims, which up until recently (aka pandemic free-time) was more sporadic. Years and years ago, I stumbled on her YouTube, maybe a month or two before she shut it down, which then led me to follow her Tumblr to than listening to Vagina Slims after she started that project. I’ve always been drawn to her taste, and in my eyes, I believe she moves through the world with an artist’s spirit.

Yes, you could say this interview is designed to support the effort of Vagina Slims, but really I just wanted to know more about a person that I found interesting.

(internal dialogue: do we always need some profound justification or reason for simply finding out more about the people we find intriguing?)

I digress – Please do not go and listen to Vagina Slims with the expectations associated with the structure of a podcast as it is in 2020. If anything, pretend you’re on a long road trip flipping through the radio stations and somehow landed on the frequency that is picking up her radio waves. She answers questions from listeners, plays fantastic music, sometimes shares her thoughts on recent movies she watched or sources of inspiration, and always confesses her musing on life in general.

My favorite part of road trips is flipping through radio stations. I’ve found a Majauna themed station in Northern California, a preacher comparing a woman’s sex life to KFC chicken in Lousiana, and a weird Christian storytime in the plains of Kansas. Vagina Slims is how I enjoy the magic of a happenstance radio program from the comfort of my home. Plus, I’m aesthetically amused by her dreamy walks and wherever she roams via her IG Story.

Without further ado – I hope you enjoy meeting Lauren Rose as much as I have over the years via the internet. (fun fact: i went to high school with the bleach striped hair guy)

What inspired you to create Vagina Slims? Do you remember how you were feeling 5 years ago when you started this project?

I initially had the idea for Vagina Slims after watching a 1990s film called “Pump Up The Volume” starring Christian Slater. In the film, his character runs this underground pirate radio station that is more or less stream of consciousness talk and his related music picks. He actually pitches his voice while on air so no one can recognize who he is and it suddenly becomes super popular at his high school and starts this revolution of sorts.

In a sense I wanted to create something similar, an open diary “My So-Called Life” format that allows for change, growth, and dissection of topics that I’m into. I’ve always been an internet kid in some way or another growing up so this was a great medium for me to talk about music/movies/life without exposing myself too much. I felt very charged when I first started it like I was finally getting closer to the truths that I’ve wanted to speak about for so long.  Years later I still upload in varying degrees, I haven’t tried to capitalize on it and that’s what I cherish the most. It is just for me and the listeners and no one else.

From what I’ve gathered from your commentary on the podcast, you work in film and events, working festival circuits. What was the first film festival you attended? And what do you remember from that experience?

Totally, I’ve been working the festival circuit for around 4 years now in combination with Art Department gigs for film and TV. The first festival I ever attended was in my home town of Minneapolis, Minnesota when I was in college. It was run by the Film Society there along the Mississippi River. I kind of felt like a kid in a candy store when I first went because I’m a huge film lover and I didn’t recognize anything that was playing. It was so exciting to see hordes and hordes of people come together to see rather obscure independent films that typically wouldn’t play in our country/region simply out of curiosity. I ended up volunteering at the festival to get free ticket vouchers and everything began after that.

Sundance is pretty big in the film festival world, even if you’re not really into films, I feel like people know what that is — the first time you went to the Sundance Film Festival, was there something about it that didn’t meet your expectations in a good or bad way – was there something that surprised you?

I didn’t think that I’d actually get to see my idols walking around – just as normal people. I remember seeing directors like Gus Van Sant or Gregg Araki around town or at their premieres and I would well up with tears because I never thought I’d see the day. There is something so special about being in the same place as some of your favorite artists, especially when you’re from a small town and their movies got you through high school. Everyone is there to support each other and their projects, midnight movies are insane, it also is so magical because you’re up in the mountains in Park City surrounded by skiers and brilliant vistas. It will always be my favorite festival.

If your life would be turned into a movie, who would you want to direct that film and could you provide a visual example of the aesthetic / color palette?

Gosh, this is a great prompt! It is so hard. I’ve always been a fan of the photographer Nan Goldin, I’d love to see a full-on feature from her. All of her photographs are so intriguing and full of story. That mixed with a bit of David Lynch. Something that subverts the suburban. Technicolor mixed with the banal. Something actually close to Gregg Araki’s work as well. Who are some of your creative influences?

I’ve always had a fondness for photographers because they can capture the most absurd things and I really appreciate the act of documentation. As mentioned I love Nan Goldin, Stephen Shore, and William Eggleston. I also love Cindy Sherman and her portraiture transformations. Then there are musical artists like Dev Hynes who I adore or the Cocteau Twins. I could go on and on. It is hard for me to narrow down folks because I’m influenced by so many, but when I step back they all share a similar vein. I like darker / grittier material that is contrasted with what we perceive as to be more traditional, especially Americana and its influences.

Do you have a memorable meal you could tell us about? Whether it’s the food that was mind-blowing, or if it was the people or place that made the meal so amazing.

There was a time in Minneapolis where my friend Willie and I would go on day trips and fly fish together. He and I have been friends for a long time and he is an artist as well. The best part of those trips was finding a restaurant or bar in the middle of nowhere after a long day of fishing. I remember we went to a random place maybe somewhere in Wisconsin, I’m not sure, but the bar had been there for ages. It looked like a shack from the outside with pinned beer memorabilia, faded pictures of Elvis, etc.   It is always a bit nerve-wracking going to these small-town places because you’re not sure if they’ll be friendly or not. Turns out we came during their weekly bingo day and none of the locals even looked at us because they were so fixated on the game. I don’t even remember what we ate, probably fries and cheeseburgers since that is all they made, but nothing compares to sitting out on a patio with a cold beer while the sun sets listening to crickets and bar chatter.

Love a good ritual, do you have a morning or evening ritual you could share with us?

I love rituals too! I’m a scattered person so any form of routine is good for me.  Truthfully it has been hard with the pandemic right now, trying to keep to some sort of semblance of life without staying up super late and vegging out. I try to start out every morning the same, when I wake up I avoid my phone/computer and just head straight to the shower. When I get out I always moisturize and put on sunscreen because I’m living in LA now and I fry instantly. Making my bed is 100% necessary for me as well or else I’ll just crawl back in.  After that, I head to the kitchen and make some coffee and finally open my computer. Sometimes I scroll Twitter but I usually try to have up some sort of research video on a topic that I’m interested in (production design lecture, cake decorating tutorial, etc). From then on I just try to make the day as fruitful as possible including taking a walk around the neighborhood to get my body moving and to see new things.

“Paris Is Burning” directed by Jennie Livingston is an absolute must-watch if you’re interested in former ball culture in NYC and the socioeconomic factors of the era.  I also really enjoyed the documentary “The Punk Singer” directed by Sini Anderson. It centers around Kathleen Hanna from Bikini Kill and the Riot Grrrl movement.

(hot tip from bekka: i’ve included youtube links to both docs and to skip ads just refresh your browser)

What are some of your favorite podcasts you listen to?

It is a bit twisted but I’m not huge on podcasts because of my attention span (I know!), but I’ve always been a fan of You Must Remember This. There is also a great Youtube channel called Be Kind Rewind that does amazing critiques on cinema throughout history.